Here is a great list of DVD's that are already out or coming out, That my family has had a chance to watch and enjoy. My DVD Roundup is a way I can make sure to keep up on all the get movies that are available for my fans.

Power Rangers: Lost Galaxy: The Complete Series
The massive spaceship Terra Venture represents mankind’s greatest accomplishment. The giant spacecraft hosts multiple habitat domes with diverse environments ranging from a lake to a mountain range (even a dome with a sprawling city inside) as it takes thousands of human pioneers deep into space to settle a new world. Along the way they are stalked by dangerous aliens led by the insect-like villain Scorpius and his daughter Trakeena. Rising to protect the colony ship and its many inhabitants, a team of Power Rangers from different walks of life unites to become the Galaxy Rangers.

Blue’s Clues: Get Clued Into School Pack includes the following:

The Legend of Korra–Book Four: Balance arrives on Blu-ray and DVD March 10 for fans to relive all the excitement from the final season. Book Four finds Korra in a journey of self-discovery and survival as the power-hungry Kuvira and her military rise up and put the Earth Kingdom in danger. The series was recently nominated for IGN’s Best TV Animated Series, Best TV Episode “Korra Alone,” and Best TV Series of 2014.  The Legend of Korra–Book Four: Balance Blu-ray and DVD, created by Nickelodeon Home Entertainment and distributed by Paramount Home Media Distribution, is available March 10, 2015, for the suggested retail price of $34.99 (Blu-ray) and $19.99 (DVD).

In Book Four, Avatar Korra is now broken and bruised and begins a journey of self-discovery and survival in a new world where the strong prey upon the weak. When an aggressive military force rises up led by the power-hungry Kuvira, the fate of the Earth Kingdom hangs in the balance and only the Avatar can set things right.

About The Legend of Korra
From the creators of Avatar: The Last Airbender comes an epic series that continues the exciting adventures of element bending. The time of Aang the last Airbender has passed, but the spirit of the Avatar lives on in Korra. In Book 1: Air, Avatar Korra struggles to fight an anti-bender movement led by the mysterious masked leader, Amon. In Book 2: Spirits, Korra and Team Avatar embark on a new journey deep into the mythology of the mystical Spirit World to defeat a dark spirit once and for all. In Book 3: Change, the world enters a new age when Airbenders begin to reappear and Korra finds herself pitted against a group of dangerous criminals seeking to overthrow not only governments, but the Avatar herself.

After a stunning battle against the Kraang and Shredder in the Season 2 finale, the Turtles find themselves without a master and without a home.  On the run and with new dangers at every turn, the Turtles are faced with bizarre new mutant creatures and must take their ninja training to the next level in order to reclaim their home.  Retreat – Return – Revenge!

Tinker Bell and the Legend of the Neverbeast
This heartwarming story explores the ancient myth of a mysterious creature whose distant roar sparks the curiosity of Tinker Bell’s friend Fawn, an animal fairy who’s not afraid to break the rules to rescue the NeverBeast. This film features voices from Ginnifer Goodwin as Fawn (“Once Upon a Time”), Rosario Dawson as Nyx (Clerks III, Sin City: A Dame to Kill For), Mae Whitman as Tinker Bell (“Parenthood”), Lucy Liu as Silvermist (Kung Fu Panda 3, “Elementary") and others! 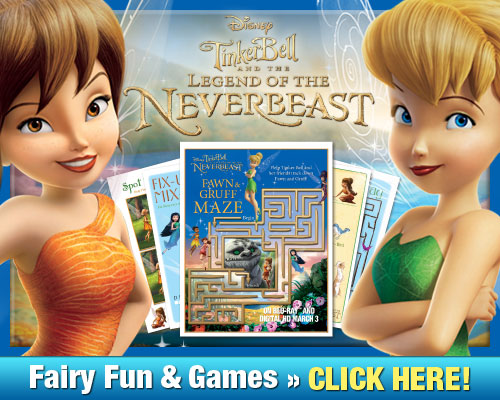